West Midlands Railway staff have joined transplant recipients, donors and other supporters to run in celebration of organ donation.

The 3k and 5k Donor Runs took place on Saturday 4 August as part of this years' British Transplant Games.

The event was a unique opportunity for transplant recipients, donor families and other supporters to come together and raise awareness of the Organ Donor Register.

There was a large turnout at the event, which took place on the University of Birmingham campus in Edgbaston.

Brenda Lawrence, head of stations for West Midlands Railway said: “This event is to raise awareness about the importance of transplantation, giving blood and supporting ther 60 donor locations all over the UK that have come together to demonstrate that just because you may have something life threatening, there is an opportunity for you to be cured, and you can have the support of the community."

Below is a round up from the event:

The British Transplant Games took place from Thursday 2 until Sunday 5 August at venues across Birmingham. Transplant recipients of all ages took part in a variety of sports, to celebrate the life-changing impact of organ donation

The games also aim to raise awareness of the huge benefits that organ donation brings to both families and recipients, encouraging the public to discuss their own wishes and join the Organ Donor Register.

West Midlands Railway provided free train travel between Birmingham New Street and University stations to competitors during the games. This included supporting the provision of Journey Makers at stations to provide directions to venues and passenger assistance to visitors.

At the closing ceremony of the games, Brenda Lawrence, head of stations for West Midlands Railway, also helped to present the awards.

West Midlands Railway is offering free train travel between Birmingham New Street and University stations to over 2,500 competitors at this year’s British Transplant Games. The annual event is taking place from Thursday 2 until Sunday 5 August across Birmingham. Transplant recipients of all ages will participate in a variety of sports, to celebrate the life-changing impact of organ donation.. 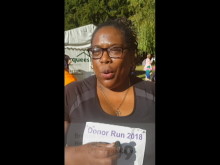 Staff from West Midlands Railway took part in the 3k and 5k Donor Runs at the British Transplant Games 2018. The event, which took pla...