Members of a Lichfield community group for adults with learning disabilities joined the celebrations as a permanent plaque marking their achievements was unveiled at Lichfield Trent Valley railway station.

The Friends 2 Friends group were recognised through the West Midlands Railway ‘Cross City Heroes’ initiative, which celebrates contributions to communities along the popular rail line.

The group was chosen as one of 24 community organisations to receive a plaque of recognition at railway stations on the line, which runs between Redditch / Bromsgrove, Birmingham and Lichfield.

Friends 2 Friends is a member led group, that promotes independence, increases confidence and supports members to learn the skills needed to be part of the community in which they live. The group provides a relaxed and informal setting where friendships can be made. Members choose what activities and courses they do, what outings they would like to go on and are supported by a group of staff and volunteers.

Alison Wellon, Friends 2 Friends co-ordinator, said: “It is an honour that Friends 2 Friends has been recognised for the member’s achievements and so important that the members themselves realise how important they are to their community. To be chosen by West Midlands Railway is even more special as public transport is so important for our members to get from place to place. Our group use trains for outings, to get to appointments and more and this is a big factor in increasing independence. On behalf of all our wonderful members, carers and volunteers I would like to say a big thank you for choosing us a Cross City Hero.”

Fay Easton, head of stakeholder and community for West Midlands Railway, said: "Through our Cross City Heroes initiative we have been lucky to see first-hand some of the incredible community groups we have across the West Midlands. We have heard inspiring stories the whole length of the Cross City line, from South Staffordshire through Birmingham and down to North Worcestershire. You can see from the smiling faces how much Friends 2 Friends Lichfield means to its members and we are delighted to celebrate their achievements with this plaque at Trent Valley railway station.”

The plaque will be on permanent display at Lichfield Trent Valley railway station from this week.

Friends 2 Friends is open five days a week, including Saturdays, and the group operates as a drop in so no referral is needed. If anyone is interested in attending the group they can call 07800 576 645. 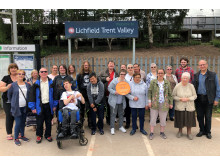