Today (Friday 28 September) marked a historic moment for the City of Wolverhampton as machines began full demolition of the city’s railway station.

It is the next stage in delivering a £150 million transport hub to provide an attractive commercial gateway to those entering the city by national rail, bus or tram.

The scheme has been cleverly designed in two phases to ensure train services from City of Wolverhampton continue to operate as normal throughout.

British Transport Police and train staff recently moved into temporary accommodation on the nearby Banana Yard.

This paved the way for contractors Galliford Try to set up the works compound and today start bringing down the former British Transport Police building, with a small section of the current station building next to Platform 1 to also be demolished.

The erection of the first section of the new station building will swiftly follow and will become operational to customers by autumn 2019, when phase 2 of the programme – bringing down the remainder of the current station and completing the new build - will also start.

The new state-of-the-art railway station to serve the city will be fully open in summer 2020.

Council Leader and WMCA portfolio holder for transport, Councillor Roger Lawrence, said: “This is a momentous occasion for the City of Wolverhampton.

“It has been a long-held vision for the council to deliver a new railway station befitting of our great city and seeing the first bricks tumbling brings us close to that reality.

“There is £3.7 billion of investment currently on site or in the pipeline across Wolverhampton.

“As part of this regeneration it is crucial visitors to our city get the best first impression possible and their travel experience is enhanced - this new state-of-the-art station will deliver that.”

Andy Street, Mayor of the West Midlands, added: “It’s fair to say that Wolverhampton has waited a long time for this new railway station and that when it is complete it will provide a suitable gateway to a thriving city.

“Just as important, the new station will be the hub of a rail, tram and bus network which will be a huge benefit to the people of Wolverhampton.

“The start of demolition work is an important milestone and I am delighted to be able to take part and equally that the West Midlands Combined Authority investment is going towards something already making progress.”

Richard Brooks, Customer Experience Director at West Midlands Railway, said: “We’ve been working closely with the council and other stakeholders to ensure that rail services aren’t disrupted by the project and the impact to our customers will be kept as low as possible. The works carried out over the next two years will give passengers in the area better transport links to the wider region than ever before.

“It’s always great to see diggers hit the ground and this is a significant step forward in the project. The West Midlands is benefitting from a huge amount of investment in its transport infrastructure and the new Wolverhampton Interchange will be one of the jewels in its crown.”

Martin Frobisher, Managing Director for Network Rail’s London North Western route, said: “We fully support third party investment like this into the railway, which along with our Railway Upgrade Plan, is helping to provide passengers with better journeys.

“With the tram extension to the station, Wolverhampton will have a transport hub which will provide local people with excellent transport links across the West Midlands and beyond.”

1/ The £150 million Interchange project includes the already-operational bus station, the building of office and retail development i10, Midland Metro city centre extension, refurbished and extended railway station multi-storey car park, and demolition of the current railway station building, with a new one to be built adjacent to it.

2/ Galliford Try is one of the UK’s leading construction groups, responsible regionally for major projects such as the Royal Birmingham Conservatoire. In the West Midlands, they have also built the Birmingham Dental Hospital, Resorts World at the NEC, and Hotel La Tour. 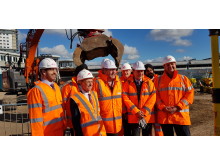 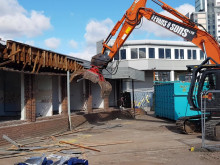 Demolition at Wolverhampton station starts on 28/09/18, for work to begin on the new transport interchange