Stechford station in Birmingham is being fitted with new lifts, ramps and a footbridge to make it more accessible for  passengers.

Jess Phillips MP visited the site on Friday 5 April to see the progress on the £3.9m project so far.

Stechford stations is being fitted with brand-new lifts, ramps and a footbridge to make it more accessible for West Midlands Railway passengers. Jess Phillips MP visited site today (5 April) to see the progress so far.

Work started in March to provide step-free access across all three platforms for the first time.

A temporary footbridge is currently being built on site to keep passengers moving while the new lifts, ramps and footbridge are installed.

The multi-million-pound upgrade to make the station accessible for everyone will be complete by the end of 2019.

The station, located on the West Coast main line between Birmingham New Street and Birmingham International, has regular direct services to and from London every day.

The investment has come directly from the Department for Transport’s ‘Access for All’ programme, which was launched in 2006 to improve accessibility at railway stations nationwide.

It forms part of Network Rail’s multi-billion-pound Railway Upgrade Plan, which is the biggest investment in the railway since the Victorian era.

Jess Phillips, Labour MP for Birmingham Yardley, said: “Whilst we have been waiting quite a long time for these improvements it feels like the community has been heard. It’s going to make a massive difference for all sorts of different people in my constituency. The campaign was actually started by an elderly woman called Eunice who just struggled with the stairs, so for elderly people and for disabled people who currently can’t use this station, it will make a world of difference.”

Francis Thomas, head of corporate affairs for West Midlands Railway, said: “Improving accessibility is a key part of our plans for local rail users. Next month we will be introducing a new cross Birmingham direct service to Liverpool and adding extra carriages to London bound services making it easier than ever for Stechford train travellers .”

Harpreet Singh Moore, Network Rail scheme project manager, said: “The accessibility improvements at Stechford station form part of our Railway Upgrade Plan. Network Rail will unlock the railway network for many people in and around Stechford, allowing them easy access to travel that was previously not possible.

“It is a pleasure to welcome Jess Phillips to the site to see the progress of the scheme so far.”

Several more West Midlands Railway stations have recently been selected to benefit from the next wave of ‘Access for All’ funding.

Smethwick Rolfe Street, Wellington in Shropshire and Worcester Shrub Hill were among 73 stations nationwide announced by the Department for Transport last week. 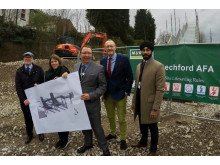