Passengers passing through Ledbury station over the next week will be visiting the official ‘Ledbury Junction for Poetry’.

The railway station has been renamed in honour of the town’s week-long poetry festival which starts today.

West Midlands Railway is supporting this year’s Ledbury Poetry Festival by adding additional railway signage to Ledbury railway station and also sponsoring the reading of a special poem which recognises the work of community groups at stations across the West Midlands Railway rail network.

‘Pride of Place’ was written by Steve Pottinger from a Black Country Trio known as ’Poets, Prattlers and Pandemonialists’.Steve will be reading poem as part of the week’s festivities at The Poetry Stage at the Ledbury Celebration on Sunday 14th July, part of six hours of non stop poetry music and entertainment on the final day of the Festival.

West Midlands Railway supports over 300 volunteers across 114 railway stations, these stalwart members of the community help to brighten up platforms through planting, painting, adding local features and arranging community activities such as book swaps and little libraries for commuters.

The train operator is also hosting a special ‘Poetry Chair’ at the station. Rail passengers are invited to take a moment to sit in the chair and put together their own literary piece, which may be published onto the Ledbury Poetry Festival website.

Fay Easton, head of stakeholder and community for West Midlands Railway, said: “Poetry is something that resonates closely with so many people and our community groups at the stations across our network have loved the Pride of Place ‘thankyou poem’. Renaming Ledbury station seems a fitting tribute to recognising the impact of poetry, particularly in light of the very special poem we commissioned last year. The poem is a literary thank you to the volunteers who brighten up railway stations across our network, and will soon be found displayed at fifty of our stations across the rail network.

“With many of the Ledbury Poetry Festival’s events just a short walk from the station, travelling to and from Ledbury by train is an easy and convenient option for visitors to the Poetry Festival this week.”

Phillippa Slinger from Ledbury Poetry Festival, said: “We are so delighted with this partnership with West Midlands Railway. Over the years many poets have stood on the station platform, from Robert Frost and the Dymock poets to the hundreds of international poets who have visited the Festival since it started over twenty years ago. So to have the station named as the junction for poetry is very fitting. And it’s equally perfect to have Black Country poets travelling down the line to perform their poetry here”

Ledbury Poetry Festival is the biggest and best poetry festival in the UK, featuring poets from all over the world. If you think you know what poetry is, come along and let the festival surprise you. There are live readings, performances, workshops, open mics, music, exhibitions, films, family events, street events, a slam and much more. Come along for a celebration of poetry in the rural heartland of England.

The Festival also runs a Community Programme, a Schools Programme, and a New and Emerging Writers’ Programme all year round as well as an annual Poetry Competition. Go to www.poetry-festival.co.uk for full details.

‘Ledbury Poetry Festival stores up the essence of poetry throughout its packed, intense and sunlit days.’ - Helen Dunmore

‘I feel that it is magical in Ledbury during the Festival. The whole town seems to be involved in all kinds of ways, from performing words and music, to making up marvellous, appreciative and informed audiences. For a while we all breathe poetry and music – it’s a bit like walking around for a few days in a paradise garden.’ John Burnside

About Ledbury signage and the Ledbury Line

The last board to be mounted on these posts was in the days of British Railways before rebranding to “British Rail” in 1965. It then read:

Through trains to Gloucester ceased to run in 1959. The line to Gloucester was laid on the line of the Hereford and Gloucester Canal, the Great Western Railway having purchased the Canal. John Masefield was a small boy living at The Knapp at the time, and writes in his reminiscences of his imagining the canal boats as ocean going ships, then watching the line being built over the course of the canal.

The line served Dymock and Newent on its way to Gloucester. The Dymock Poets occupied cottages around Greenway just north of Dymock. The Great Western Railway established a halt at Greenway but too late to be of any use to Edward Thomas and his friends.

Poets, Prattlers and Pandemonialists are a three piece poetry group, based in the Black Country, who regularly perform at venues across the West Midlands. The group was commissioned to write the 'Pride of Place' poem to celebrate to work of station volunteers across the region.

More information on the group can be found at pandemonialists.co.uk 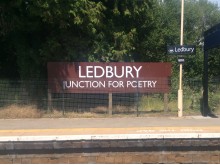