Local Samba performers have been celebrating their recognition as local community heroes.

North Worcestershire based Someone at the Door Samba Band (SATD) have been showing off their Cross City Heroes plaque, as they celebrate their award for contributions to the local area.

The group has been chosen as one of 24 community organisations to receive a plaque of recognition at railway stations on the popular Cross City Line between Redditch / Bromsgrove, Birmingham and Lichfield. The plaque will be on permanent display at Alvechurch railway station from this week.

Someone at the Door Samba band regularly play at various events across Bromsgrove, Redditch, Birmingham and further afield. Band members range from teenagers to active seniors who all enjoy playing samba grooves at carnivals, festivals and other events.

The band loves to perform in support of events organised by Cureleukaemia, Marie Curie, Injured Firefighters Charity and other worthy causes. Most recently, the band played in Brindley Place on Saturday 15 June at the Dragon Boat final and festival, where several thousand pounds were raised to support Cureleukaemia charity.

Band member Sean Shannon, said: “Someone at the Door is absolutely delighted to have been selected as a one of West Midland Railway’s ‘Cross City Heroes’. We love samba and it’s even better when we are helping a worthy cause raise some funds!”

Fay Easton, head of stakeholder and community for West Midlands Railway, said: “Someone at the Door Samba Band were nominated for their charity work and the joy they have brought to local communities through their performances, so it is a pleasure to be able to recognise the group with a plaque at Alvechurch station as part of our Cross City Heroes competition. As the Cross City Line passes through many of the communities where the band have plays, and is a key part of connecting communities across North Worcestershire, Birmingham and South Staffordshire, for both work and leisure.” 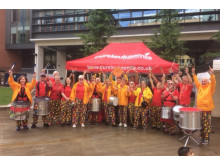 Someone at the Door Samba...