Passengers using one of Birmingham’s busiest stations can now benefit from the latest in Japanese technology with the arrival of new cashless vending machines.

The state-of-the-art machines, unveiled at Snow Hill station today, include screens displaying real-time train information for passengers as well as informative maps of the local area and rail routes.

The modern machines allow users to pay for their purchases with credit or debit cards rather than scrambling for change – and a unique QR Code scanner will enable any promotional discounts to be applied.

The machines are customisable for wheelchair users, allowing the user to switch the display to a lower level.

“We are always looking for ways to improve the experience for our passengers across our network. These machines will give our customers at Snow Hill the chance to access the very latest technology when using the station.

“By offering real-time train information these new machines will assist passengers in keeping their journey plans up-to-date as well as offering a convenient, cash-free selection of food and drink.”

"These innovative vending machines will provide a new station experience to West Midlands Railway passengers by offering a unique mix of drinks and snacks including some Japanese favourites such as a Aomori apple juice."

The new vending machines at Snow Hill are the brainchild of JRE Water Business, a subsidiary of passenger railway provider East Japan Railway Company, which is a shareholder in West Midlands Trains.

The machines are already in use at a number of railway stations in Japan and are being introduced at Snow Hill as part of a 12-month trial scheme. 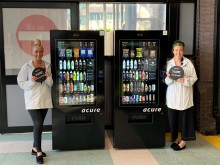