Members of Scouts Bromsgrove have been celebrating their Cross City Heroes win.

Children from the group took a trip on the Cross City Line over the weekend (Sat 9 June) to take a look at their plaque, ahead of it’s permanent display at Barnt Green station this summer.  The young people, from Finstall Scout Troup, which is part of Scouts Bromsgrove, visited Steelhouse Lane Lock-up in Birmingham City Centre. The group spent the night at the disused police station after visiting the on-site museum to learn about the history of local policing.

Fay Easton, head of stakeholder and community for West Midlands Railway, said: “The Cross City Line connects communities across North Worcestershire to Birmingham, and is a big part of many people’s lives. Getting young people to use the train with confidence can open up so many opportunities for them, so it is always great to be able to welcome groups like this onto our stations and trains. Scouts Bromsgrove, along with other local groups, clearly make a positive impact on those around them, so it is a pleasure to be able to recognise the group with a plaque at Barnt Green station as part of our Cross City Heroes competition.” 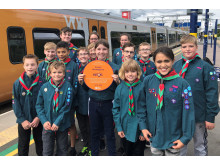 Members of Scouts Bromsgrove celebrate their Cross City Heroes recognition with a day out on the Cross City Line. The plaque will go on ...