Commuters at Bromsgrove station will have up to three additional trains per hour to Birmingham from next week, as electrification work on the line is completed.

From Sunday 29 July, West Midlands Railway services on the Cross City line that currently start and terminate at Longbridge will operate to and from Bromsgrove. This will provide additional services at the station throughout the day and a fully electric service between Bromsgrove and Lichfield.

There will be up to five trains per hour to and from Birmingham New Street during the peak and between two and four trains per hour in the off-peak. This represents a major uplift in the number of trains serving Bromsgrove from 45 to 132 on weekdays.

CrossCountry services will no longer be calling at Bromsgrove from Monday 30 July. Previously, two trains in each direction called at the station in both the morning and evening weekday peaks.

Network Rail has invested £100m in installing new track, new signaling and upgraded power to allow the new electric train service to run. The new overhead power lines between Barnt Green and Bromsgrove were switched on in May 2018, when the first trains started test runs on the route. The electrification of the line is part of a £1bn investment in the region and follows the construction of the new Bromsgrove station which opened in July 2016.

Richard Brooks, customer experience director at West Midlands Railway said: "Our customers in Bromsgrove will benefit immensely from these new services – with far more choice of when and where they can travel. Not only are we offering more trains to and from central Birmingham, but also to many other destinations on our network that were previously not served directly from Bromsgrove."

Richard Dugdale, senior sponsor at Network Rail, said: “Bromsgrove passengers are benefiting from more trains to more places as a result of millions of pounds of investment in the railway in the area. Working with our partners, the Railway Upgrade Plan is delivering huge benefits across the country and this is the latest example. With the new station and electric trains, Bromsgrove now has a railway it can be proud of.”

The extra trains to Bromsgrove will support a package of wider improvements to the Cross City line. This includes 100 new carriages, that are due to be delivered under the region’s new rail franchise which is managed by West Midlands Rail Executive - a consortium of local councils, in partnership with government.

Cllr Roger Lawrence, chair of West Midlands Rail Executive and transport lead on the West Midlands Combined Authority, said: “Electrification and the extra trains for Bromsgrove mark the latest stage in a 40-year journey for the Cross City Line during which time our local transport authority has worked tirelessly with partners to transform the route into the region’s busiest commuter line, relied on by thousands of people every day.

“It now means Bromsgrove will get the same sort of high frequency service enjoyed by the rest of the Cross City Line and that’s good for the regional economy as well as for passengers. Together with the new franchise improvements, it shows the value of local investment and of moving responsibility for the regional network from Whitehall to the West Midlands.”

Rail Minister Jo Johnson said: “We are investing in the most significant upgrade of the rail network since Victorian times, delivering more trains, a greater number of services and more comfortable journeys for passengers.  The completion of this project demonstrates the benefits of our £1bn investment in the region’s railways, with a significant increase in the number of trains into central Birmingham during peak times.”

About Abellio
Abellio is the international passenger transport subsidiary of the Dutch national railway company, Nederlandse Spoorwegen. Every day our people provide rail, bus and tram services to 1.7m customers across the UK, Germany and in the Netherlands. In the UK we operate buses through Abellio London, as well as ScotRail and Greater Anglia train services, and Merseyrail in a joint venture with Serco. In Germany we operate Abellio Deutschland, serving communities in North Rhine Westfalia, Saxony, Lower Saxony, Saxony-Anhalt, Hesse and Thuringia. Our role in transport extends beyond the journey from a-to-b. With our international heritage and our policy of sharing best practice, not just amongst ourselves, but across the wider transport industry, we provide thought leadership and truly innovative ideas which make a positive contribution to the communities we serve. For more information on Abellio visit www.abellio.com

About Mitsui
Mitsui is one of the most diversified and comprehensive trading, investment and service enterprises in the world with 139 offices in 66 countries as of March, 2017. Utilising our global operating locations, network and information resources, we are multilaterally pursuing business that ranges from product sales, worldwide logistics and financing, through to the development of major international infrastructure and other projects in the following fields: Iron & Steel Products, Mineral & Metal Resources, Infrastructure Projects, Integrated Transportation Systems, Chemicals, Energy, Food Resources, Food Products & Services, Consumer Services, IT & Communication, and Corporate Development Business. Mitsui is actively taking on challenges for global business innovation around the world. For more information, visit www.mitsui.com.

About JR East
East Japan Railway Company (JR East) was established in 1987, when Japanese National Railways was divided as part of a package of railway reforms. JR East’s railway business covers a 7,500 km (approx. 4,660 miles) network in the eastern part of the Japanese main island, including Tokyo Metropolitan area, and provides transportation services, comprising urban, suburban and high speed operations, for 17 million passengers on a daily basis. JR East also undertakes non&dash;transport commercial activities, which account for more than 30% of the total revenue of JR East Group. JR East contributes to passengers and communities it serves by delivering high degrees of punctuality, reliability and comfort and also continues to pursue higher levels of safety and service quality through technical innovation. For more information, visit www.jreast.co.jp/e. 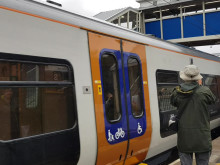