Clean Air Day is an annual event, which is part of a UK wide campaign to tackle air pollution, by encouraging people and society as a whole to adopt more environmentally friendly behaviour.

For this year’s Clean Air Day, Colmore BID hosted a successful event with the train operator, and representatives from Birmingham City Council, Brompton Bicycles, Midland Metro Alliance, National Express West Midlands and Public Health England. The organisations came together in St Philip’s Cathedral Square, to provide advice and information about the movement to improve our air quality across Birmingham and the wider West Midlands.

The event was well attended by passers by, particularly in light of recent announcements around the proposed Clean Air Zone charging scheme aimed at reducing air pollution in Birmingham city centre.

West Midlands Railway spoke to over 200 people during the day about various sustainable travel initiatives being piloted across the rail network. The train operator also surveyed over 100 members of the public about how they travel to and from their local railway station. The surveys will form part of a wider project to improve connectivity across the region and promote greener and healthier travel habits among commuters.

Jan Chaudhry-van der Velde, managing director for West Midlands Railway, said: “Rail travel has never been more popular. Following the most significant enhancement to timetables across the West Midlands for ten year, which was introduced last month, there are now even more opportunities for people to travel by train.

“We are in the process of investing £1bn into our services and as part of this we will be introducing newer, more environmentally friendly trains, which will increase capacity on our network by 25%. We are also looking at how we can connect seamlessly with other local modes of public transport to promote and support sustainable travel. Passenger feedback is a key part of this.”

Paul Fielding from Colmore BID”s Accessible & Connected Working Group said: “As a Green Travel District, we always celebrate Clean Air Day and this year we invited partners to gather together to promote accessible and environmentally friendly ways to commute to work and move around the city. Our hope is that we can gradually change people’s attitudes and their approach to travel and that they adopt other means of sustainable behaviour. After all, we all want to breathe clean air.”

Councillors Waseem Zaffar, Cabinet Member for Transport & Environment at Birmingham City Council, said: “I’m hugely grateful to Colmore BID for putting on this wonderful engagement opportunity around the important changes we need to make to ensure that Birmingham becomes a city where breathing clean air is a reality.”

Councillor Kath Hartley, Chair of the West Midlands Combined Authority’s (WMCA) Transport Delivery Committee, said: “Clean Air Day is a great opportunity for us all to get involved in making the air cleaner and healthier. WMCA and Transport for West Midlands are working hard to make it easier for people to leave their cars at home. This includes helping operators to upgrade bus fleets to the latest ultra-clean engine standards, expanding our tram and rail networks, and introducing new cycling and walking initiatives. As well as improving the quality of the air we breathe, fewer car journeys will reduce traffic congestion, which already costs this region £2 billion each year.” 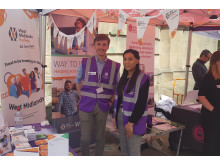