The first Class 230 D Train has entered passenger service on the Marston Vale line this morning (Tuesday 23 April). Unit 230004 is now in service on the route between Bletchley and Bedford.

The train, which has been developed by Vivarail, will provide extra capacity and improved customer experience for passengers on the line.

The first service to operate was the 0516 from Bletchley this morning.

London Northwestern Railway will be operating three new two-car D Trains on the route once the project is completed this Spring.

The interior of the trains features fully accessible toilets, various seating options, more space and USB sockets at every seat.

The D Trains are also quiet, green and clean, with automatic engine shut down when the trains are at stations. The lightweight aluminium bodyshell also means the train uses less fuel, have superior acceleration and provide swift and comfortable journeys.

Jonny Wiseman, customer experience director for London Northwestern Railway, said: “The Class 230 train now operating on the Marston Vale line is a fantastic addition to our fleet – and will increase capacity on this popular line. There has been a lot of anticipation for the introduction of the D Trains from staff, railway enthusiasts, commuters and the local community, and we hope that our passengers find them comfortable and welcoming to travel on. These trains are unrecognisable from their former life on the Underground and Vivarail have created a modern and comfortable train, ideal for this route.”

Adrian Shooter, CEO of Vivarail, said ‘This is a very proud day for all at Vivarail and I am delighted to see the first of our trains in passenger service. Our design and engineering work has been focussed on ensuring the Marston Vale trains are of the quality and standard the passengers deserve. I think we’ve achieved that and I look forward to the feedback we’ll receive. The new livery is very appealing but the bespoke artwork really does stand out as something quite special. Our partners at London Northwestern Railway have worked tirelessly with us to bring these trains into service and I thank them once again for all the support and faith they have shown in us as we have grown from a start-up business into a full train manufacturer in such a short space of time.”

The trains feature a special London Northwestern Railway livery for the line, with artwork from local artist Alisha Miller. Alisha was commissioned to produce three locally-relevant designs, that will be displayed on inside the trains.

The remaining two D Trains will be introduced on the line in coming weeks, and will be maintained at the Bletchley depot, creating new jobs in the local area.

The Marston Vale Line will also benefit from enhanced timetables from Monday – Saturday from May, when London Northwestern Railway introduces it’s new May timetable. There will be an hourly service throughout the day on the route. A Sunday service will be introduced on the route from 2021. 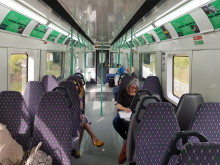 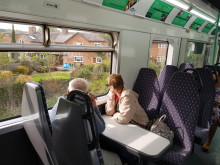 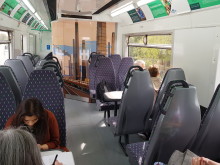 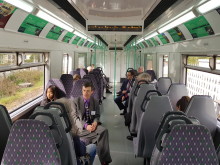 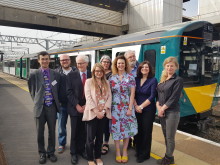 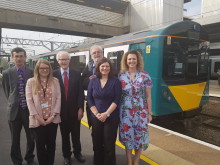 Representatives from Marston Vale Community Rail Partnership, London Northwestern Railway and others, at the launch of the first Class 23... 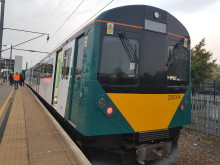 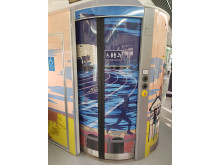