The train operators set up the ‘Donate your Delay Repay’ scheme in December 2017 and the initiative has raised £7,186 for Samaritans in its first year.

Donations can be made when customers claim compensation for delayed or cancelled trains, with the money going to the charity instead.

Delay repay compensation is paid when London Northwestern Railway or West Midlands Railway services are delayed by 15 minutes or more. As fatalities continue to be a major contributor to delays and cancellations on the rail network, the train operator wanted to give customers the option to support the life saving work of the charity.

Samaritans works tirelessly to reduce the number of fatalities on the rail network. This includes training staff in how to communicate with suicidal customers, and encouraging travellers to look out for one another with their ‘Small Talk Saves Lives’ campaign.

The charity also assists in the aftermath of incidents by supporting both staff and customers.

Richard Godwin, suicide prevention manager working with London Northwestern Railway, West Midlands Railway and Network Rail said: “We want to thank our customers for their generosity. For every life lost on the rail network, six are saved by an intervention. We continue to work closely with Samaritans as they undertake life saving work across the rail network. We see unfortunate events unfold far too regularly and are committed to doing all we can to reduce the number of fatalities on the railway. This scheme is completely optional and there is no pressure for people to donate, so we are so grateful to all our customers for all their support.”

Neil Peters, strategic programme manager from Samaritans, said: “When someone is feeling overwhelmed, it’s vital that they are listened to and supported to work through difficult thoughts and feelings. With our confidential 24-hour service, available 365 days a year, we are often the only place people can turn to. Every six seconds somebody contacts Samaritans and the charity responds to more than 5.7 million calls for help a year. Thanks to West Midlands Railway and London Northwestern Railway, and the generosity of their passengers, we can continue to raise awareness of our services and raise vital funds. Together, we will save lives.”

Samaritans Vision is that fewer people die by suicide. The charity works to alleviate emotional distress and reduce the incidence of suicide feelings and suicidal behaviour.

The charity does this by:

For more information go to samaritans.org

Rail passengers are being encouraged to look out for those around them, in the latest Samaritan’s campaign to reduce suicide on the railway. Small Talk Saves Lives is a joint partnership between Network Rail, Samaritans, the British Transport Police and the wider rail industry, including train operators. 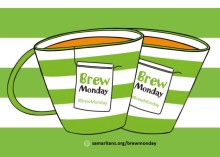 Samaritans encourages travellers to take time out on Brew Monday

Samaritans volunteers will be at railway stations across the network today, to raise awareness of Brew Monday. The annual campaign encourages railway staff and customers to take time out for a cup of tea and a chat. Brew Monday coincides with ‘Blue Monday’, which is considered to be the most difficult day of the year.