Cash left on trains and at stations operated by London Northwestern Railway and West Midlands Railway will now be donated to charity.

The train operators have handed over the first donation of money found as lost property on the rail network to Alzheimer’s Society - the company's staff-nominated charity partner for the year.

Any cash handed in or found by railway staff must be kept for three months to allow the owner to come forward – but if it remains unclaimed beyond this time, the money will now be going to charity on a monthly basis.

The first donation of £1076.70 has been gifted as part of a year long partnership in place with Alzheimer's Society, to improve the experience for rail passengers living with dementia. The train operators and the charity are working together to improve staff training and to use feedback from passengers to make train travel more accessible.

Francis Thomas, head of corporate affairs for London Northwestern Railway and West Midlands Railway, said: “Money is one of the most common things that is picked up as lost property on the rail network – and we want to see this unclaimed money going to a worthwhile cause. As we are supporting Alzheimer’s Society as our staff charity of the year, this is a great opportunity give to the charity financially, in addition to the practical support we are offering to those living with dementia. In the future, we would love to be able to support other worthwhile organisations too, so pledging to put this money to good use is an important step.”

Ryan Stanley, Community Fundraiser for Birmingham said: “We are delighted that money left on trains and in stations operated by London Northwestern Railway and West Midlands Railway will now be donated to Alzheimer’s Society. Dementia devastates lives and Alzheimer’s Society research shows that 850,000 people in the UK have a form of dementia, 70,000 of these people live in the West Midlands. By 2021, one million people will be living with the condition and this will soar to two million by 2051. Dementia deaths are rising year on year and 225,000 will develop dementia this year – that’s one every three minutes.

“The money donated and awareness raised by London Northwestern Railway and West Midlands Railway will help Alzheimer’s Society fund research into the cause, care, cure and prevention of all types of dementia and Alzheimer’s Society is committed to spending at least £150 million on research over the next decade. This includes a £50 million investment in the UK's first dedicated Dementia Research Institute. Until the day we find a cure, Alzheimer's Society will be here for anyone affected by dementia – wherever they are, whatever they're going through.”

Railway staff have also been taking part in special training sessions to become Dementia Friends - with the aim of getting all staff at the train operator's through training over the next year. This is part of a wider initiative to make more railway stations dementia friendly – through looking at what simple changes can be made around stations, as well as improving staff awareness and training.

London Northwestern Railway and West Midlands Railway have committed to making rail travel more accessible for those with dementia. Through a year long partnership with Alzheimer’s Society, the train operators will be taking steps to make stations and trains more dementia friendly. The charity will also be educating frontline staff around best practice in helping those with the condition. 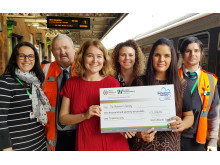 Lost property money is do...