Today marks the start of the £1 billion investment into the West Midlands franchise network by West Midlands Trains (WMT), a joint venture between Abellio, JR East and Mitsui.

WMT won the right to operate the franchise in August and will replaces London Midland services with two new brands – West Midlands Railway (WMR) and London Northwestern Railway (LNR). WMR will operate in and around Birmingham and LNR will operate on the Euston, Northampton, Birmingham and Liverpool corridor.

As part of the £1bn investment, £680m will go on new trains manufactured by Bombardier and CAF. All of the Bombardier trains will be made at their factory in Derby, helping stimulate the local supply chain. By the end of the franchise there will be 25 per cent more carriages on the network than at the beginning.

There’ll also be £70m towards new and existing depots as well as £60m on station improvements. All this will help provide far more capacity for those heading into London and Birmingham during rush hour, with space for an extra 85,000 passengers at this time.

To deliver all this WMT will be putting £18m towards staff training and development at all levels. It is also committed to training 900 apprentices over the next eight and a half years, bringing forward the next generation of leaders on the railway.

Two launch events were held for the franchise in Northampton and Birmingham to recognise the two different brands. Attendees included the Rail Minister, Paul Maynard, along with the Mayor of the West Midlands, Andy Street, and Iain Stewart MP from the Transport Select Committee.

“I am delighted to welcome the beginning of a new era in the West Midlands for rail passengers.

“This government is delivering the biggest rail modernisation programme for over a century and we are committed to giving passengers the services they want across the country.

“The new West Midlands franchise will transform travel for tens of thousands of passengers thanks to over £1bn of investment - which will mean longer, more frequent trains, faster journeys and a more reliable service for passengers.“

“We believe this new franchise has the ability to bring significant improvements for passengers especially in terms of increased frequencies and more on-board capacity.

“But it has also been drawn up in such a way that it will be more effective in supporting wider economic growth and jobs across our region and we look forward to working with West Midlands Trains in making that happen.”

“It’s great to get started on delivering everything we’ve promised to our customers across the network. The £1bn of investment will allow West Midlands Trains to be one of the core drivers of faster economic growth throughout the regions in which it operates.

“We’re delighted to see so many of our new trains produced in the Midlands, stimulating the local economy. Along with the 900 apprenticeships put in place over the coming years, we’ll be building a legacy that will benefit the industry for decades to come.”

For further information please contact George Robinson at george.robinson@abellio.com or on 07769 880205.

About Abellio
Abellio is the international passenger transport subsidiary of the Dutch national railway company, Nederlandse Spoorwegen. Every day our people provide rail, bus and tram services to 1.7m customers across the UK, Germany and in the Netherlands. In the UK we operate buses through Abellio London, as well as ScotRail and Greater Anglia train services, and Merseyrail in a joint venture with Serco. In Germany we operate Abellio Deutschland, serving communities in North Rhine Westfalia, Saxony, Lower Saxony, Saxony-Anhalt, Hesse and Thuringia. Our role in transport extends beyond the journey from a-to-b. With our international heritage and our policy of sharing best practice, not just amongst ourselves, but across the wider transport industry, we provide thought leadership and truly innovative ideas which make a positive contribution to the communities we serve. For more information on Abellio visit www.abellio.com

About Mitsui
Mitsui is one of the most diversified and comprehensive trading, investment and service enterprises in the world with 139 offices in 66 countries as of March, 2017. Utilising our global operating locations, network and information resources, we are multilaterally pursuing business that ranges from product sales, worldwide logistics and financing, through to the development of major international infrastructure and other projects in the following fields: Iron & Steel Products, Mineral & Metal Resources, Infrastructure Projects, Integrated Transportation Systems, Chemicals, Energy, Food Resources, Food Products & Services, Consumer Services, IT & Communication, and Corporate Development Business. Mitsui is actively taking on challenges for global business innovation around the world. For more information, visit www.mitsui.com.

About JR East
East Japan Railway Company (JR East) was established in 1987, when Japanese National Railways was divided as part of a package of railway reforms. JR East’s railway business covers a 7,500 km (approx. 4,660 miles) network in the eastern part of the Japanese main island, including Tokyo Metropolitan area, and provides transportation services, comprising urban, suburban and high speed operations, for 17 million passengers on a daily basis. JR East also undertakes non&dash;transport commercial activities, which account for more than 30% of the total revenue of JR East Group. JR East contributes to passengers and communities it serves by delivering high degrees of punctuality, reliability and comfort and also continues to pursue higher levels of safety and service quality through technical innovation. For more information, visit www.jreast.co.jp/e. 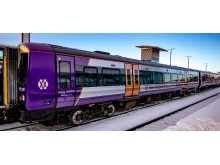 Andy Street, Mayor of the... 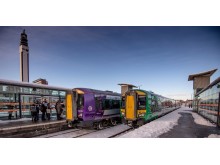