New uniform for London Northwestern Railway and West Midlands Railway employees has won ‘Best Design of the Year’ at the 2019 Professional Clothing Awards.

Staff at the train operators were issued with their new uniform earlier this year, following months of consultation to put together the final design. The uniform includes everything from trousers and skirts, shirts, ties, shell jackets and coats for staff working at stations, on trains and at maintenance depots across the rail network.

Following the introduction of the London Northwestern Railway and West Midlands Railway brands in December 2017, the train operators wanted to bring in a uniform that reflected the change, but was also practical and comfortable for those in customer facing positions to wear everyday.

The final design for the uniform was heavily influenced by staff and finalised in conjunction with designer Debbie Johnson. Debbie is an experienced and established designer, who has worked with a number of famous names.

Adrian Thompson, HR director for London Northwestern Railway and West Midlands Railway, said: “It’s fantastic to see the design of our uniform being recognised against some of the huge brands across the world and different industries. Designing and implementing a uniform is no mean feat, so it was critical that the design had our people involved from the start and hard work in helping us with this was really paid off. Our staff can now be easily recognised by passengers out on the rail network in their award winning uniforms!”

Following the rollout of the new uniforms, over ten tonnes of old uniform was donated to The Salvation Army Trading Company. This is being used to provide affordable workwear for those in need, or is being recycled into sound proofing, mattress filling and other uses.

The awards were held in London on Wednesday 19 June and were hosted by Strictly Come Dancing Anton Du Beke.

About the Professional Clothing Awards

The Professional Clothing Awards have been established to recognise the international uniform supply chain and reward exceptional workwear, corporate clothing and PPE from around the world.

The awards cover all facets of the working garment industry from PPE Innovation of the Year Awards, kindly sponsored by Magnum, Supplier, Manufacturer and Distributor Awards, Industry Recognition Awards, Business Manager Awards and new to 2018 Professional Clothing Awards, ‘VISION’ sponsored by CORDURA, which shines a light on student designers from across the globe looking to make their mark on the professional clothing industry. For more information of the awards visit www.professionalclothingawards.com/index.html 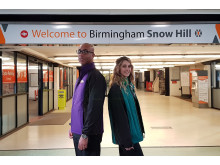